Things have been quiet over here at A.I. Kemp, at least on the viewer’s side. Over here, life has been pretty chaotic. No doubt, the last couple of months have been rocky, but we’re finally getting back to things.

So far this year, we’ve had one awful event happen every month. Some have been worse than others, but all of them have been pretty terrible. For example, our paternal grandfather (and last remaining grandparent) passed away in February. In March, my cat (and oldest friend) passed away at the ancient age of 23. Both deaths were expected, but I still stayed home and cried my eyes out while grappling with my belief/disbelief in an afterlife.

To be honest, losing my cat, Ivy, was one of the hardest moments in my life. I adopted her from a PetsMart over 19 years ago. She was surrendered to a shelter earlier that year when her family decided to move overseas. My mother tried to encourage me to pick out a much prettier black and gold cat, but when I saw that Ivy was an odd eyed cat, my heart was sold.

I’ve lost track of how many times I moved growing up, but Ivy was always a constant in my life. I loved her to death, even when she was being too prissy for her own good. The few times I had to leave her with my parents as I stayed at college were difficult. When she was younger, she was prone to getting deathly ill when stressed, so I worried about her in my absence. But every time she stopped eating, I would nurse her back to health.

Every time except this last time.

The week leading up to her death was a struggle for me. But on her last night, she did something odd and curled up with the dog. For a year, they’ve done nothing but fight. It seemed like both a small miracle  and a sign that she was ready to go. She had made her peace with the Shih Tzu.

As terrible as it was, there were some good things about March. For example, my husband and I celebrated our first wedding anniversary. And this month, I. Kemp finally quit a soul-sucking job that was preventing her from doing anything related to art. Even better, we felt confident enough to enter Windmill Keepers into a contest for self-published novels. Things are looking up. And it’s about time.

We will be flying home in May to attend my grandfather’s internment and a family reunion, but afterwards, our entire focus will be on the upcoming convention. Utopia Con 2016 is looking like it’s going to be fantastic. We can’t wait to be there, and we can’t wait to be done with Book 2 so that we can finally announce its release.

P.S. This was one of the last photos we took when my cat was well. It’s how I like to remember Ivy.

Hey everyone! I know it’s been forever, but we just wanted to give everyone a heads up on what’s been going on over here at A.I. Kemp. In May of this year, we moved from southern Florida to Northern California. In December, we were given military orders to relocate from the San Fransisco area to D.C. That’s two cross country moves in seven months. Needless to say, we’ve been pretty tied up.

There is good news, however!

For one, we finally have a house. We’re renting, but it feels amazing. We haven’t had a place to call home for a long while. Three bedrooms and a basement bar is a huge leap from an apartment with paper thin walls and a community laundry room. Also, unless drastic changes occur, we should be staying stationary for the next five years. That’s a lot of extra time to write.

We have a new site in the works, and the link will be shared with everyone as soon as it’s completed. Book Two is also underway, but I can’t say for sure when it is coming out (we’re aiming for early summer, if at all possible).  For now, we’re focused on making some pretty awesome art for Windmill Keepers.

Finally, I. Kemp and myself will be at UTOPiAcon. from Wednesday, June 22nd until Friday, June 24th. We have a booth and everything, so if you’re in the area, check us out! There’s going to be some pretty neat stuff to purchase.

That’s all I have for now. I hope everyone is having a great start to 2016. If you’re not, don’t fret; there’s still eleven more months to turn it around.

Hey! I’ve been out for a bit, buried up to my neck in telephone wires (long story), but our dear little sister sent us another piece of art work. I’m literally blown away at her talent, especially considering her age. Book Two is well underway, with a hopeful release date of early Spring in 2016. Remember, if you order the paperback version of Windmill Keepers off of Amazon, you can get the e-book version for only $0.99.

“We lived in God’s blind spot.“

Want a story about child slavery, a genius girl, and a daring plot to escape? Like to save money? If so, you’ll love this announcement…

It’s time for a sale!! Starting on September 22nd at midnight, the e-book version of Windmill Keepers will be available for only $2.99 on Amazon! The sale ends midnight, September 29th, so get it while you can, and don’t forget to review on Goodreads. 🙂

When I was younger, we spent a lot of time inside libraries. It was a free way for my parents to entertain us. When I got older, I would ride my bike to the library on my father’s air force base and spend hours sorting through books on the paranormal and epic fantasy adventures. I did this on weekends and even through summer vacations. Eventually, I would learn that my grandmother used to work for a library. It kind of makes sense that I was comfortable sitting between the stacks of books, reading about ghosts and sword fights. It’s in my veins.

My family never really had a lot of money, so buying books was rare. Libraries were a free place for us, where checking out a dozen books didn’t feel like bankrupting our budget. It was a safe haven from the summer heat, and also where I could learn anything I wanted. To me, libraries were and still are magical.

One thing I remember very clearly from my grade school days was watching Matilda. In the very beginning, the main character ends up walking to the library everyday to read a tiny mountain of books. Eventually, the librarian gives her a library card, despite her young age. That scene actually made me want to work in a library for a long time. Giving people access to books felt like one of the most important jobs in the world. In a way, I think it still is.

In 2002, a Malawian teenager named William Kamkwamba built a windmill to power appliances from his home. He went on to build even more, and eventually made a solar powered water pump for his village. He did this by reading books he found in the library. It’s amazing what people can do, when given the resources.

Even in an age where electronic sources are taking over, I still feel that libraries have a place in our world. Lending programs such as Openlibrary and KDP are proof that online libraries are possible. They should be everywhere. Books aren’t something our country should be withholding and not being able to afford education doesn’t mean a person shouldn’t have access to it. Such a barrier is a detriment to our society.

Libraries have done more than just educate me. They gave me access to adventures and magic. I found a thousand creepy stories to recite at slumber parties. Even when things were crashing down around me, the books I found gave me a place to hide and recenter myself.

Whenever I go online and look at my account on KDP, I can see how many pages someone has read of my book through the lending library. It makes me happy to know that someone stumbled upon my book and enjoyed it enough to keep reading, even on their weekends. I feel almost like the authors I found hiding in my favorite libraries.

In the end, that’s all I ever needed.

Today, I sent of my first signed copies of Windmill Keepers! It’s an exciting milestone for me and I. Kemp 🙂 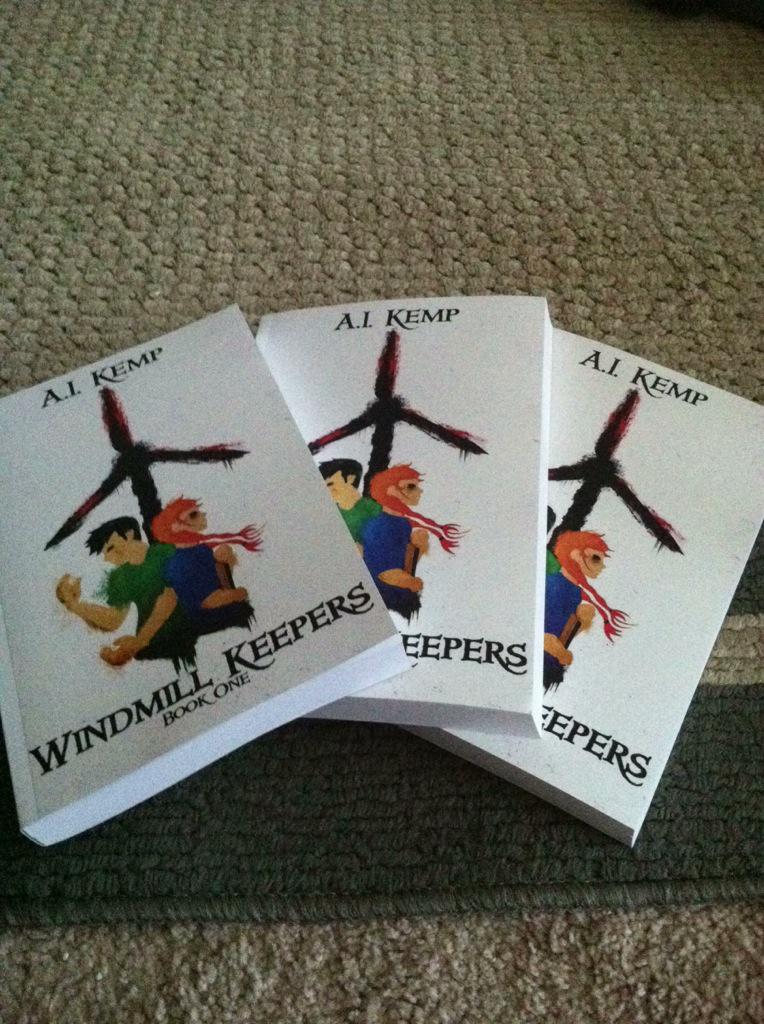 Hey everyone! The paperbacks are IN!!! You can buy them HERE for $9.99. We’re pretty excited to finally see them in a non-digital form. If you want to help spread the word about Windmill Keepers, be sure to review the books on Goodreads or Amazon (or both!).

Thanks to everyone that helped to make this a reality. Despite all the roadblocks and low moments I’ve experienced this year, it’s been amazing. In only eight months, I’ve had three lifelong dreams come true. I can’t wait to see what’s next.

Just a quick update! Paperbacks are going to be available for order through Amazon sometime in the next few days. I’ll give the official announcement as soon as I get the go-ahead 🙂

Hey guys! I.Kemp here of the A.I.Kemp partnership now announcing that Windmill Keepers: Book One is finally available for worldwide purchase through the Amazon Kindle Store! You may buy the book HERE!! for $5.99 or read it for free with Kindle Unlimited!

“The Windsor Miller Corporation has taken over the turbines of Europe and is set to eliminate their competition with cheap energy. Unknown to their consumers, the root of the company’s success lies in their social service program. Throwaway children are forced to maintain the colossal windmills with no regard for their safety or lives. Sickness, abuse, and bloody accidents are a dark reality for these children, known as Keepers.

When her father suddenly dies, Kite Lyons is resigned to spend her life as a slave to one of Windsor’s windmill farms. As a sixteen-year-old Keeper, Kite has two years left before she is moved to a Windsor factory. But when an accident claims the life of a close friend, the trauma of her companion’s death drives Kite to make a bold decision. Armed with a set of notes and the genius mind she inherited from her father, Kite teams up with her four mill mates to craft a daring escape plan. But the road to freedom is filled with detours, and before Kite can save anyone, she must come to terms with her greatest loss and find the courage to defy an oligarchy.”

We would like to thank everyone who made this possible, including all the friends, family, professors, and classmates throughout the years who encouraged and criticized. We’d also like to thank Nadège Richards who did a beautiful formatting job and our editor Shannon Thompson.

We are currently working with Create Space to release a paperback version that is scheduled to come out in the next coming month and be available for $9.99. Please stay tuned for further details on that announcement!